I had been dreaming to visit the ancient city of Teotihuacan for a long time – in 2011 my dreams became a reality when I travelled to San Miguel de Allende, Mexico. We took a day trip to Mexico City and stopped at the ancient city of Teotihuacan on our way back to San Miguel.  I was amazed with the overwhelming energy while visiting the site. Sitting atop the Pyramid of the Sun I was flooded with memories of having been there before, like déjà vu. Teotihuacan means “the place where the gods were created”.

This age-old city is located about 50 kms north-east from Mexico City and is said to be one of the most powerful cultural centres in Mesoamerica. Very little is actually known about the founding of this vast city. It is estimated that the majority of construction of the ceremonial core likely started around 1 AD with major monuments continuously being built until about 250 AD.  At its peak, Teotihuacan was home for at least 125,000 people up to 200,000 in its zenith – one of the largest cities in the Western Hemisphere at its time.

In ancient time the site covered about 21 square kilometers. The area seen today lies along the 2km of the Clazada de los Muertos.  Teotihuacan had thousands of residential compounds, temples, many small pyramids and four main attractions. Two of the largest  structures found on site are the Pyramid of the Sun (largest) and the Pyramid of the Moon (second largest). The Temple of Quetzalcoatl is one of the most sacred temples in the site, you will find several serpent heads here. There is also a museum where you can view interesting artifacts found in the site such as; obsidian, pottery, shells and bones made by the inhabitants of the city.

Stairs to climb the pyramid of the Sun

Along the “Avenue of the Dead” the pyramids align in perfect distance of each of the orbit’s of our planets in our solar system and perhaps significant is the fact that the large Pyramid of the Sun is positioned at the center of the other structures – reflecting the fact that the Sun is at the center of our solar system and that the planets revolve around it.

The height of the Pyramid of the Sun is more than 200 feet with a base width of 739 feet – making it the second largest pyramid built in the new world.

Climbing the Pyramid of the Sun

In front of the Pyramid of the moon 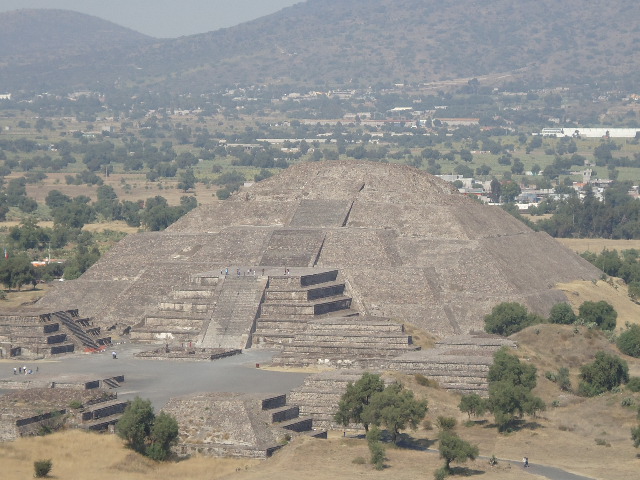 Pyramid of the moon

Teotihuacan was made a UNESCO world heritage site in 1987 and is one of the most important archaeological places in the world. A great mystery of Teotihuacan is that no one really knows where all its inhabitants went – it was as if they just vanished. In 400AD there were about 200,000 inhabitants and about three hundred years later it was found completely abandoned. The Aztec then would visit the ruins to perform religious ceremonies. They believed that Teotihuacan was the birth place for the Aztec Gods.

I highly recommend a visit to Teotihuacan if you will be in or around Mexico City.  Here are a few “good to know” tips…

We travel not to escape, but for life to escape us - anonymous

“I am not the same, having seen the moon shine on the other side of the world.” – Mary Anne Radmacher

“Nobody can discover the world for somebody else. Only when we discover it for ourselves does it become common ground and a common bond and we cease to be alone.” – Wendell Berry